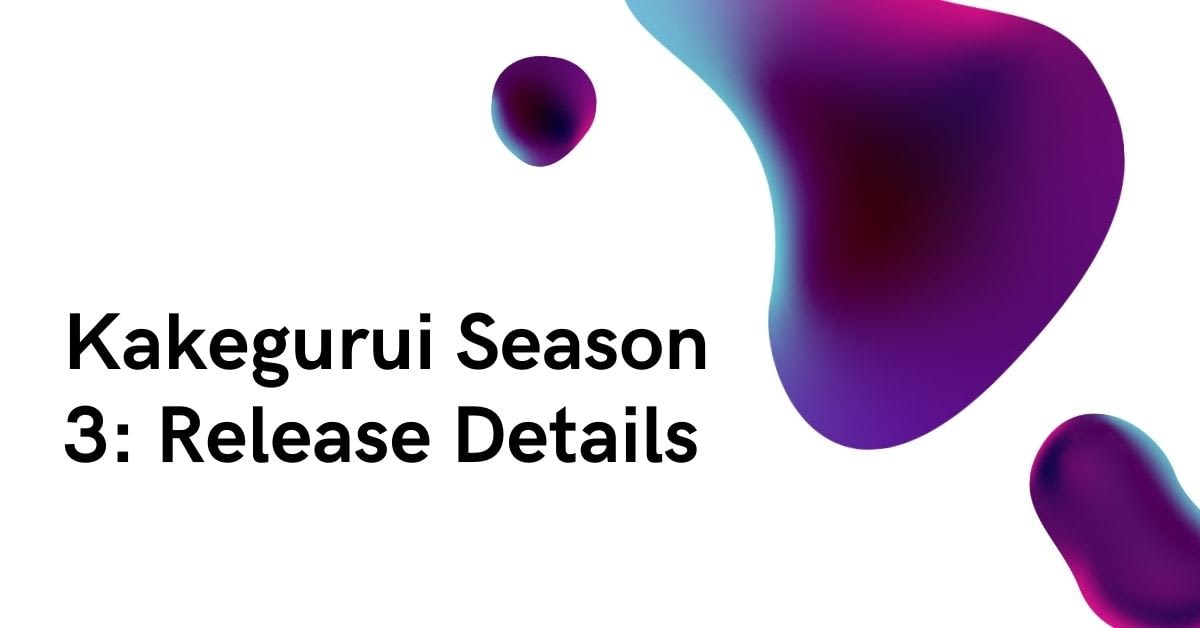 For all the otakus out there, Kakegurui season 3 is what Santa should bring them instead of literally any other present; not even the next-gen console can sway them from their original demand. This is obvious due to the bevy of tweets that kept Twitter buzzing during the pandemic and the ensuing lockdown; as the people were confined to their homes, Netflix saw a big bump in their viewership stats and a good majority of anime fans laid their eyes on the hit anime series Kakegurui, which was released upto season 2. Many people took to the internet to convey their frustration on the fact that there was no fixed date or even a glimmer of hope for season 3 of Kakegurui.

As of December 2020, there is still no definitive release date for the third season of the popular gambling anime; rumours around the community at first put the date somewhere between December of 2020 and January of 2021; amid the conclusion of the first wave of the pandemic, many people were hopeful of Kakegurui to drop its third season in the holidays season (as if the whole year wasn’t already a really boring holiday). However, as of writing this well into December, there are no definitive dates; with the pandemic slowly rising back to its peak levels, many have pinned their hopes on mid-2021 for the third season. In this passage, we’ll take a look at Kakeguiri and what makes it so compelling that people everywhere are clamoring for the third season.

When is Kakegurui Season 3 Coming Out?

Not anytime soon, that’s for sure. According to many official manga and anime series websites, the upcoming season is still pending a release date from the publisher, the animation studios and even Netflix themselves. They’ve all kept mum on the Kakegurui season 3 release date, which further perturbs the fans as a date would lower their risks of having an anxiety attack. With no word from the officials, otakus are forced to turn to third-party sites, which have narrowed the date down to mid-2021 if the coronavirus pandemic slows down by the start of the new year.

In short, expect season 3 of Kakegurui to hit Netflix sometime around the June-July period. Unless the animation studio MAPPA is planning for a surprise release, there is no reason to believe that season 3 will be dropped in December or even in the coming few months.

Why are People so Hyped for Kakegurui Season 3?

Anime has found a populous fanbase worldwide. Japanese media overall has been pretty successful in capturing people’s attention in America to elsewhere; from mega-hits like Dragon Ball (which has spawned a whole franchise worth a whopping $4 billion) to niche-hits like Death Note and Initial D, Japanese-made cartoons and mangas are read and consumed worldwide. And Kakegurui is no different than any of the aforementioned series.

Like basically every other well-received anime series, Kakegurui derives its popularity from the range of colorful characters that it has across its list of characters and its story. Many such series are famous because of its story and plot arc; Death Note is among the many that join the bastion of anime series that is loved and revered for their storyline. Kakegurui caters to the niche of gambling; as such, contains many mind games that people love to see on-screen between fictional characters. It was particularly praised for its ability to include such a compelling story with a basic story plot: a school where your gambling prowess determines your status and repute as a bright student. People like to see mind games being played on unsuspecting villains and shrewd bypassers, and Kakegurui delivers just that, with a bit more engaging storyline and a ton of gusto. Click here to read more.

Season 1 of Kakegurui saw the introduction of the whole ensemble to the viewers; we are introduced to the Hyakkaou Private Academy, we are introduced to the basic premise of the show and we are introduced to the protagonist of the entire show: Yumeko Jabami, who is described as an intelligent, charming and beautiful high-school student with a penchant for gambling (or rather a compulsive gambler), which she self-confesses as ‘doing so for the thrill of it’. Unlike others, who are driven by motivation of high status and prestige within the school by winning games of roulette, poker or blackjack, the protagonist does not feel the need to be compelled by the machinations of the school, she does it for the sake of doing it and in turn, shakes the school’s foundations to its core by rewriting the rules of how to win bets against established players and top-ranked students.

Season 2 further built on the entire story and gave us a deeper look and an insight on how Yumeko plays and wins against her foes and eventually wins over them to get them on her side: match after match, viewers are treated to the intricate webs she spins to trap her opponents during games of blackjack, roulette and tarot cards and makes established players and previously undefeated players sweat while playing with her, giving them a run for their vast money they come from (the majority of students enrolled in the school are from the upper-echelon of the society; children of the uber-rich, the CEO’s, chairmen and businessmen who run corporate Japan). The second season was particularly well-received since it focussed more on the mind games; the character development and introductions had been taken care of in the first season of Kakegurui.

What can you expect from Kakegurui Season 3 when it is released?

According to many fan theories and rumours milling around on chat boards and forums online, the third season of Kakegurui will likely return to the roots of the show and will attempt to strike a balance between character development and furthering the story arc; that is, the story is expected to dive deeper into the humble origins of Yumeko and her sister, as will the character arc of other friends and foes will be developed further. As for the story arc, since season 2 practically ended at a cliff-hanger and left people wanting for more, you can expect a fair bit of more mind games and more story development; we are likely to see Yumeko conquer the remaining members of the school with her wit and deviously-equipped betting skills.

When it does release, who knows what the lovers of the anime get; however, the character arc seems to be an overarching topic of discussion among the fanbase, which is the most likely topic to be discussed in Kakegurui season 3.

Is a Kakegurui Season 3 possible at all?

With the dearth of information the official studios and Netflix is giving about Kakegurui season 3, many have speculated that there might not be a third season of the anime series at all. Because anime series that evolve into hits like Kakegurui seem to fall in two categories; the first being the series that reaches its logical end within the span of a season (Death Note with just 36 episodes) and others (Dragon Ball Z, Initial D) which need a whole saga to complete just the character arc and not the story arc. Kakegurui season 3 falls smack in the middle; it has already aired two seasons on Netflix and the story arc isn’t complete and yet there are no signs of Kakegurui season 3. It certainly has the numbers to justify a third season; the hit anime saw a maximum rating of 66 per cent on the aggregate website Rotten Tomatoes (which is pretty good for an animated series), a healthy 7.2 out of 10 on the IMDb website and an even higher 7.4 on the niche list MyAnimeList. All of these stats make it a big player in the world of even bigger players and multi-billion-dollar franchises and a prime candidate of a third season; like many fans of the series, we were also left wondering as to why Netflix and MAPPA would do something like that to the loyal fans of the series who have helped Kakegurui become a part of the cultural zeitgeist of the 21st century.

The numbers and the popularity it has gained over its year on the popular streaming website Netflix certainly merits a third season and even more content should be slated for release over the next few years, but apparently, the production companies are taking their time in mapping out the right direction for the series to go, which is a good thing.

The one thing that does actually confirm that when will Kakegurui season 3 come out and will there be a season 3 of Kakegurui is the manga series, that has gone upto 13 volumes, totalling some 75 chapters, which can be turned into animated series as anime’s continuation from season 3 onwards. The fact that the manga exists and is already on sale (despite having sold pretty well) confirms to the fans worldwide that the issue is with the production and animation (most likely animation bottlenecks and hurdles due to the ongoing coronavirus pandemic) and not with the content and material itself. Here’s to hoping Kakegurui season 3 drops soon..

Another thing that has many waiting with a baited breath is the naming controversy that is bound to arise if the producers follow with the same sequence; Kakegurui’s first and second seasons were officially marketed and released as Kakegurui X and Kakegurui XX; if you have spent even a second on the internet, you know what could potentially go down if the third season of Kakegurui follows the same naming convention. We don’t need to spell it out for anybody.