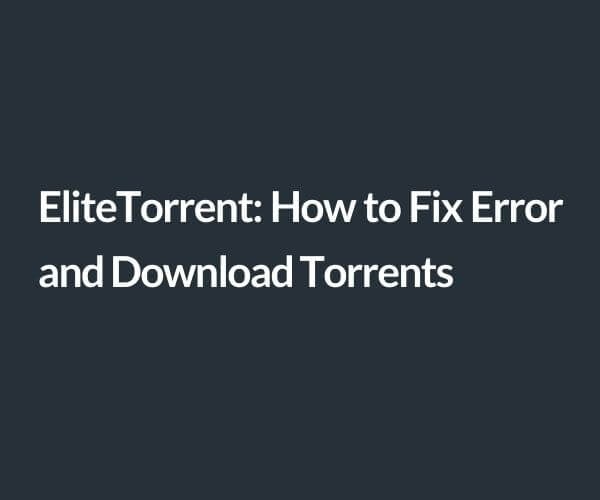 One of the most visited sites on the internet are torrenting sites, websites that allow peer-to-peer file sharing. This is because they provide free stuff; free games, movies and TV series. Where there’s free, there’s a crowd. Among the most popular torrent sites is EliteTorrent, which provides the largest archive and directory for Spanish movies and TV series and boasts a hefty internet traffic, and rightfully so.

This passage will get you up to speed with the EliteTorrent website; how you can download movies from it and how you can resolve common errors like 500 internal error in EliteTorrent.

When we state torrents in Spanish, it includes both that come within the ambit of the phrase; Hollywood movies and shows subbed or dubbed in Spanish or Spanish movies and telenovelas made in Mexico and elsewhere where Spanish is a native language. As such, you can expect there to be a lot of traffic on the website and many people downloading torrents off EliteTorrent.

Like many other torrenting websites that populate the internet, EliteTorrent has had its fair share of shutdowns and arrests of the people behind the website. So, you might ask what happened to EliteTorrent that it has gotten overshadowed by websites like The Pirates Bay, Extra torrents or RARBG? All this and more follows.

EliteTorrent is a peer-to-peer filesharing website, also known as a torrent website, with the niche being ‘Spanish dubbed movies/ TV series’ and ‘Spanish-sourced content’. It was, at the time of its inception, the first one of its niche to offer torrents in Spanish language and still remains the most-visited website in the specific market.

As such, it has attracted a lot of attention that pirating websites are notorious for and has been shut down many times, only for it to be resurrected with a new domain name or an entirely different website architecture.

EliteTorrent torrent service deals exclusively with Spanish-language content; movies, TV shows, animated features and a host of other entertainment options contain either Spanish sub-titles or dubbed versions of the content.

It laid claim and still does, to being the first website to cater to that demographic and to provide language-based alternatives for pirating entertainment options like movies and TV shows.

EliteTorrent has had a slew of problems; from attempts to shut it down completely which resulted in searches like ‘what happened to EliteTorrent’ and internal server errors, which gave us ‘how to fix 500 internal error in EliteTorrent’.

While this may seem a bit too much from a website with traffic like this, torrenting websites routinely face problems like this; with great responsibility comes great problems, and since these websites are responsible for entertaining a whole lot of online pirates, they have to take the occasional hits. The trick of the trade is to be resilient like The Pirates Bay. Click here to read m0re such articles.

What happened to EliteTorrent?

As explained beforehand, torrenting and peer-to-peer sharing websites are some of the most persistent and resilient websites on the internet; since they have an important duty to perform (catering to all the freeloaders and pirates out there), as such, they cannot afford to simply roll over and accept their fate dispensed at the hands of Hollywood lawyers.

They fight back; with new domain names, revamped websites and whatnot. What happened to EliteTorrent is that it received the same treatment as many websites before it; The Pirates Bay was felled, several Norwegian hackers were tried in court for their attempts to kickstart filesharing websites and many more were prosecuted.

EliteTorrent itself got banned many times owing to the nature of its piracy-laden content and was blocked many times, only for it to return in a new form, with a new domain name.

Nowadays, finding EliteTorrent is difficult because many new and modern sites have rendered it obsolete. Sites like RARBG and YIFY have on-page language options that give you the torrent file based on your language preference, eliminating the need for dedicated websites like EliteTorrent.

However, that’s not to say that the website has been eradicated for good; with the right use of a proxy and a bit of hunting, you can find the website and start downloading content off of it.

While EliteTorrent may have received the short end of the stick for a long time, it was never completely down and still there are various emulated or iterations of the site that you can access to download torrents of movies like The Kid Who Would Be King on EliteTorrent.

These sites are pretty resilient and at the risk of offending the moderators and the pirates’ community, are a bit like cockroaches; you just can’t seem to kill them.

How to download The Kid Who Would Be King EliteTorrent

You simply can’t talk about torrenting websites and NOT mention how to download a specific movie or TV series torrent. Hit movies, like 2019’s The Kid Who Would Be King are available for download on EliteTorrent, with the added benefit of catering to the Spanish audience, by including both sub-titles in Spanish and the runtime language, which is also Spanish.

You can find the torrent for ‘The Kid Who Would Be King’ on the EliteTorrent website by simply searching for the movie in the search bar located on the top-most of the website. Searching for the movie will return the results, which may or may not include previous versions of the movie or the actual, English-themed movie.

Click on the one you want to download, and a .torrent file will be downloaded to your computer, which you can then open by using any bit-torrent handling software like uTorrent or BitTorrent.

The file and the movie will be downloaded in Spanish, which would make it easy for your viewing and understanding and will also be free. Be sure to follow these steps to download The Kid Who Would Be King on EliteTorrent.

How to fix ‘500-Internal Error’ in EliteTorrent?

Sites with an unfortunate past like EliteTorrent routinely show up errors like these ones: ‘Error 500: Internal Error’. For successful troubleshooting, you need to understand first what is an internal error and how to fix 500 Internal Error in EliteTorrent.

In case of EliteTorrent, if such an issue presents itself, it could be the server on which the website is hosted, not your ISP, your internet or your PC. It means that the EliteTorrent’s server is acting up and needs to be rectified.

To fix the error, two troubleshooting methods are most common and effective. The first is the simplest one; restarting or reloading the website. A server error, especially a localised one can be resolved with a simple click of the browser’s reload button or manually pressing Ctrl+R, which, for websites like EliteTorrent, work just fine.

Be aware that if you are using a proxy server to access the torrent website, the reload may take more time and would take more tries overall too, since the proxy’s server would be acting as an intermediary between your internet server and the website’s own.

The second one would pertain to something the website itself suggests if the error is presented. It usually states ‘try again in a few minutes.’ What it means is that after the passage of a certain amount of time, the server error will have been rectified and you would be able to access EliteTorrent despite the previous Error 500-Internal Error. These two are the most usable and common troubleshooting methods.

EliteTorrent users, which are primarily accessing the website because of its Spanish content, have time and again reported that the website gets down frequently and it has become common for them to wait a couple of days before the website gets available for access with a proxy server. That is because EliteTorrent net has to endure a lot of shutdowns officiated by Hollywood and other affiliates looking to shut down the pirating operation altogether. More traffic on a website means increased surveillance and the easier it becomes to locate and shut down the website.

This explains why torrenting websites with high traffic like The Pirates Bay and others have faced routine shut downs and raids by anti-piracy task forces; the more users they have, the more common a website gets and the higher it starts to rank on the Google search index, which makes the website an easy target to be singled out and shut down.

EliteTorrent has also been shut down pretty often, but like other websites, it has always returned back with altered user interfaces or changed domain names to keep itself and its developers afloat, plus not lose millions of users who are a dependant of the website for a good time and good entertainment.